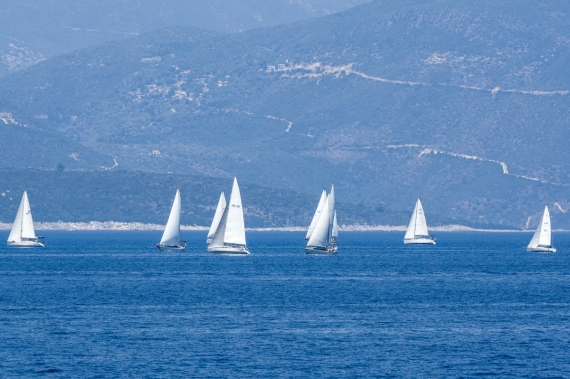 ** Changes in this version:

NoR: Notice of Race

1.1 The event is governed by the rules as defined in The Racing Rules of Sailing,  including RRS Appendix C.

1.2 The rules for the handling of boats and the equipment list, detailed as part of the  SI, will apply, and will also apply to any practice sailing and sponsor races. Class  rules will not apply.

1.3 The notation ‘[NP]’ in a rule of the NoR or SI means that a boat may not protest  another boat for breaking that rule. This changes RRS 60.1(a).

1.5 Any prescriptions of the national authority that will apply shall be posted on the  official notice board.

1.6 If there is a conflict between languages the English text takes precedence.

1.7 The event has applied for World Sailing Grade 2. This grading is subject to review  by World Sailing. The event may be re-graded when there is clear reason to do so.

The SI will be available on September 1st, 2022 and will be posted on the official  notice board.

3.1 Notices to competitors will be posted on the online official notice board which is located at < https://www.racingrulesofsailing.org/documents/3802/event >.

3.2 Signals made ashore will be displayed from the signal mast of Corfu Sailing Club.

4.2 Only skippers invited by the OA, and who confirm acceptance of the invitation, as  detailed in the letter of invitation, will be eligible to enter this event. Skippers  wishing to receive an invite may register their request with the OA by sending a  request for an invitation (RfI) by the closing date mentioned in the RfI form.

4.3 (a) The event is open for non-European teams since it is a part of WWMRT.  Entries for the event will be accepted from Members of EUROSAF (MNAs) who  are in financial good standing with the organization, and these teams will have a  preference to be invited with maximum of one team per MNA.
(b) One entry is reserved for the host country and one entry is reserved for the OA.

(c) All other entries will be based on the World Sailing Match Racing ranking list of June 2022, except that only one entry will be accepted from any one MNA.

(d) Should there be more entries than places available, the places shall be awarded  to the requesting teams based on the following preferences:

To the highest ranked skippers on the World Sailing Match Racing ranking list  issued four months prior to the Championship (World Sailing Regulation  27.2.1) with a maximum of one team per country.

(e) If fewer than 12 entries are registered within the time limit, the OA will fill up  with entries in accordance with EUROSAF Match Racing Regulation 3.7 except  that these teams might be not only from EUROSAF Members. The wild card(s) will be chosen by the OA in conjunction with the EUROSAF Executive Board.

4.5 All competitors shall meet the eligibility requirements of World Sailing  Regulation 19.4.

4.7 The skipper shall complete registration and pay any entry fee before the date  mentioned in the official invitation letter, unless extended by the OA.

A non-refundable entry fee of 450 Euro shall accompany the acceptance of invitation for this to be valid and should be deposited no later than the date specified in the letter of invitation.

The entry fee will be refunded only in case of cancellation of the event due to COVID-19 or other circumstances on the responsibility of the OA. The bank account details will be included in the invitation letter.

4.8 When a skipper accepts an invitation and later withdraws within two months of  the event or leaves the event before the end without written approval from the OA,  a zero score may be applied to their Ranking points for that event by World  Sailing. (World Sailing Regulation 27.2.2(d))

5.1 a) An initial damage deposit of 500 Euro shall be paid at registration either in cash  or by credit card and in local currency.

c) Any remaining deposit at the conclusion of racing will be refunded immediately  after the event.

6.1 The number of crew (including the skipper but excluding persons placed on board by the OA) shall be 4 or 5 or 6. All registered crew shall sail all races.

6.2 After the warning signal for a match, the registered skipper shall not leave the  helm, except in an emergency.

6.3 When a registered skipper is unable to continue in the event, the OA may  authorise an original crew member to substitute.

6.4 When a registered crew member is unable to continue in the event, the OA may  authorise a substitute, a temporary substitute or make other adjustments.

6.5 The total weight of the crew, including the skipper, dressed in at least shorts and  shirts, shall not exceed 340 kg, determined at the time of registration or such time  as required by the RC

6.6 Crew weight may be checked during the regatta. When crew weight was checked  prior to racing, at any re-weighing the total weight limit is increased by 10 kg.  Any crew weighing in excess of this increased limit shall not be penalised, but  they shall reduce their weight to the increased weight limit before racing again.

6.7 The OA may place a person on each boat as either a guest, cameraman, or umpire  observer.

7.1 The OA intends to provide the following type of boats for racing in each event:  Platu 25. Each boat will have the following sails: Mainsail, Jib, Spinnaker.

7.2 Boats will be allocated as decided by the RC. The intention of the RC will be to  allocate boats by draw, either daily or for each round. The RC may also require  boats to be exchanged in a knock-out stage.

7.3 The sails to be used will be allocated by the RC. Competitors may be requested to  exchange sails during a series to satisfy sponsorship commitments.

7.4 While all reasonable steps are taken to equalise the boats variations will not be  grounds for redress. This changes RRS 62.

7.5 The number of matches to be sailed each day will be determined by the RC with  the intention of the RC to start each subsequent flight as soon as practicable after  the previous flight.

7.6 The course will be windward/leeward with starboard rounding, finishing  downwind.

7.7 The intended course area will be in close proximity to the shore, in the area around  the old Fortress of the city of Corfu.

7.8 (a) Skippers will be seeded into a round robin based on a draw. (b) After the First Stage the following will apply:

(1) Skippers will be paired based on ranking in the First Stage with the highest ranked skipper paired with the lowest and the other skippers paired accordingly, unless the stage specifies a different arrangement.

(2) With reference to RRS C4.1, the highest ranked skipper from the  First Stage shall choose their end for the first match and boats shall alternate every odd match.

(3) Crews will exchange boats after odd matches of the series, unless  otherwise agreed by both skippers.

(4) Further matches in the series will not be sailed once the first skipper scores the points required for that stage.

7.9 The event will consist of the following stages:

(a) First Stage - Round Robin

(1) All skippers will sail a round robin.

(2) The eight highest scoring skippers shall qualify for the next stage.
(c) Second Stage – Quarter Finals

(1) The eight highest scoring skippers of the First Stage will sail a round robin.

(2) The four highest scoring skippers shall qualify for the next stage.

(1) The skipper finishing first in the previous Stage shall select his opponent when requested by the RC to do so. The remaining two skippers shall race each other.

(1) The losing semi-finalists shall race to determine third and fourth place.

(2) The first skipper to score at least 2 points shall be awarded third place, the losing skipper awarded fourth place.

(1) The first skipper to score at least 3 points shall be awarded first place, the losing skipper awarded second place.

7.10 The RC may change the format, terminate any stage or the event when, in its  opinion, it is impractical to attempt to hold the remainder of matches under the  existing conditions or in the remaining time scheduled. Early stages may be  terminated in favour of later stages.

8.2 Unless excused by the OA, attendance at the following is mandatory:

(a) Initial briefing for skippers.

(b) Daily briefing for skippers.

(c) Prize giving for the final skippers and crews.

9.1 [NP] Boats may be required to display advertising chosen and supplied by the OA.

10.1 Competitors and Support Persons shall comply with any reasonable request from  any official, including attendance at official functions, co-operation with event  sponsors and shall behave so to not bring the event into disrepute.

10.2 Competitors and support persons shall handle any equipment by the organizing  authority with care, seamanship, in accordance with any instructions for its use  and without interfering with its functionality.

11.1 No support person vessels will be permitted.

(a) Television personnel and equipment (or dummies) supplied by the OA  shall be carried on board while racing.

(b) Competitors shall wear microphones supplied by the OA during racing and  be available for interviews when advised by the OA or RC.

(c) Registered skippers shall wear communications equipment supplied by the  OA that will allow commentators to communicate with them whilst racing.

12.2 Competitors shall not interfere with the normal working of the OA supplied media  equipment.

12.3 The Media Rights of the Championships and the associated intellectual property  are the exclusive property of EUROSAF. The Media Rights, in full or in part, may  be transferred to the OA, subject to agreement between the two organizations.

12.4 EUROSAF and the OA shall have the right to use the results and any images,  video, or sound recorded during the Championship, free of charge. The OA, in  obtaining, using, and sharing with EUROSAF and third parties such material, shall  comply with all relevant obligations related to personal data protection.

RRS 3 states: ‘The responsibility for a boat’s decision to participate in a race or to  continue racing is hers alone.’ By participating in this event each competitor  agrees and acknowledges that sailing is a potentially dangerous activity with  inherent risks. These risks include strong winds and rough seas, sudden changes  in weather, failure of equipment, boat handling errors, poor seamanship by other  boats, loss of balance on an unstable platform and fatigue resulting in increased  risk of injury. Inherent in the sport of sailing is the risk of permanent,  catastrophic injury or death by drowning, trauma, hypothermia or other  causes.

14.1 EUROSAF gold, silver, and bronze Championship medals shall be awarded to the  first three teams of the Championship.

14.2 The Wossala Trophy will be awarded to the winner of the Women’s European  Championship. This is a trophy donated by George Wossala, President of  EUROSAF from 2004 to 2010. This is a perpetual trophy, awarded annually, and  shall remain the property of EUROSAF. It is the responsibility of each champion  to return it clean and undamaged for the next Championship.

E-mail: This email address is being protected from spambots. You need JavaScript enabled to view it.

Tweet
back to top
FaLang translation system by Faboba